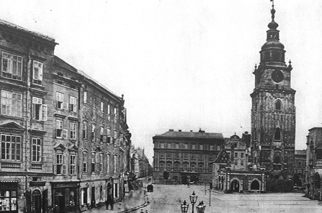 The building in its current configuration was constructed at the beginning of the XVI century when the merchant, Paweł Kaufman, joined two older XIV and XV century homes. Hence the building was called the “Podkaumanowska” or, due to the coat of arms of the owner, “Under the Azure Lion”…

Next the Cellari family, which left Milan for the far of country on the Vistula River, to trade in cloth, lived here. As the family was hard working, and fortune smile upon them, they soon became one of the richest families in the city. In 1633, Paweł Celar, whose lovely tomb is found in the Mariack iChurch, renovated the building. His son Jan Paweł – the burgrave of Krakow and a general – during the Swedish “deluge” fought against the Swedes and was the commander of the fortress in Jasna Góra in Częstochowa. At this time, the building already belonged to the castellan of Krakow, Stanisław Warszycki. This rowdy and trouble-maker, showed himself to be of an upright character during the “deluge” – as he was one of the few who remained faithful to King Jan Kazimierz, even though most of the rest of the country had already succumbed to the Swedish invader.
The aforementioned Baltazar Haller took possession of the building in 1796. He was the son of a distinguished Krakow family, which set up the first printing press in Poland, in Krakow , in the XVI century. Over two hundred years it printed more than 230 titles ( amongst others the first book in Polish – the History of Christ’s Passion). Baltazar himself traded in spices and English beer. The building, together with his daughter, became part of the Wentzl family. That’s how it’s remainde until today, the Wentzl name has remained the name of the building, and of the renowned hotel and restaurant located her today. I has become a good trademark. 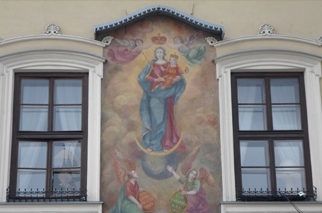 The Wentzls, who “married into” the building, hit the mark, because the place not only had a centuries-old tradition, but also a certain “positive” energy. How else can one explain the fact that during the great fire of 1550 this building was spared, while others around it were gutted?…

The miracle was attributed to the picture of Our Lady which was painted on the facade in 1718,hence the building’s name “Under the Picture”.During the fire nevertheless, three big churches and a lot of houses which had holy pictures on their facade, were destroyed.